Apple introduced its script library loading system in OS X 10.9, something that was long overdue. The system provides a choice of locations for script libraries, and with choice comes the need to make decisions. Here are some suggested approaches.

First, a summary of how library loading works. You reference a script with a use script statement, followed by its name (with or without extension). AppleScript will then look for the script to load at run-time. Unlike the library mechanism used in Script Debugger, script libraries are not embedded in your script by default.

AppleScript follows a strict search order. If the script containing the use statement is a bundle — an applet or .scptd file — it first looks within the bundle itself, inside /Contents/Resources/Script Libraries. If it does not find it there, it looks in the user library, in ~/Library/Script Libraries. If it doesn’t find it there, it looks in /Library, then /Network/Library, then /System/Library.

In OS X 10.11 and later, it looks in two other places. You can use an environment variable of OSA_LIBRARY_PATH to define a path that is searched after the script’s bundle (not something most people will ever do). And if none of the above are successful, it will also search the bundles of all known applications.

TIP: Don’t use subfolders in Script Libraries folders. They may work, but they are unsupported and may stop working at some point in the future.

So where should you keep your script libraries? That depends on how you deploy your scripts.

If you write scripts for a small group of people, say for a group of co-workers, you might want a different approach. You probably distribute scripts as run-only in this case, and it might be more difficult to update libraries. Your choice is also going to depend on whether the contents of libraries are likely to change often.

If updating shared script libraries is difficult, or if you deploy scripts more widely, the best choice is to embed them within the scripts you distribute. If you normally distribute .scpt files, you should be able to use .scptd files instead, so you can embed the libraries. But you probably do not want to embed script libraries while you are developing and testing scripts.

So a practical workflow might be this: on your development machine you have the editable libraries in ~/Library/Script Libraries, and obviously the scripts that use them are in editable form. When you wish to distribute the scripts, you can embed the libraries, export as a run-only applet or .scptd bundle, choosing the Make bundled scripts & libraries run-only option, and then hopefully remember to remove the embedded versions when you have finished. 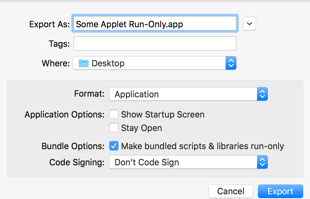 That’s a bit tedious, but fortunately the process can be scripted. Here is a sample script you can adapt to your needs:

Some comments on the script: