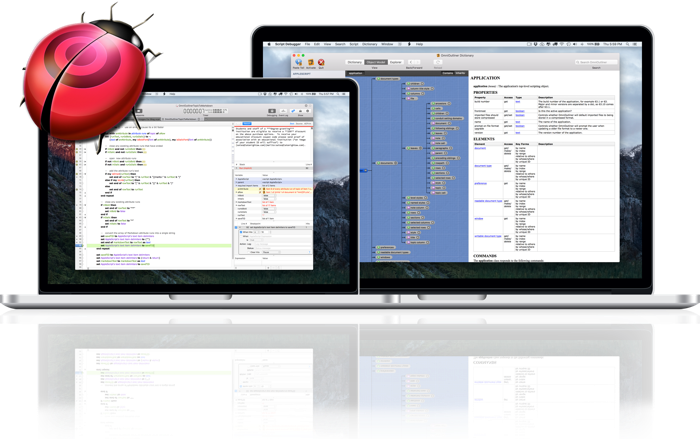 We too appreciate AppleScript’s ability to let you automate repetitive and time consuming tasks. But much like entering a maze at night, using AppleScript requires guesswork — and plenty of feeling around in the dark. Script Debugger flips on the light switch so you can see what’s in front of you. It gives you more than just a flashlight, it gives you daylight.

What Is Script Debugger?

The power of Explorers doesn’t drop away when you leave the dictionary. As you move to edit your script they follow you and are available as you create and debug your script to show the information you’re operating on.

As you create a script, you’ll need to test it to make sure it behaves as expected. The first step is to run the script. Should an error stop the script, Script Debugger tracks all the variables and their values up to that point, making it easy to discover what went wrong. Script Debugger presents a complete picture of what’s happening as your script runs.

The ever-present Explorers continually appear to show any value in great detail. If the value happens to be a reference to a song in iTunes, for example, it not only gives you its name, it also lets you explore the song’s attributes.

Use single-stepping to watch your script as it runs, line by line, viewing the values of all variables at every stage of the script’s execution. Use breakpoints to pause your code at key points. You can even create breakpoints that trap conditions in your code. You’ll never have to add another AppleScript log statement just to see where you are and what the value of an important variable is. With Script Debugger, your code works by design, not by guesswork.

After developing a script, you need to package it for your client, working group, or whoever is going to utilize it. Script Debugger leaps in at this point to check for common errors when packaging scripts. Script Debugger 6’s always-on code signing and versioning tools make distributing scripts to others amazingly simple. Should your script contain sensitive or private information, you can export it in Run Only form to prevent others from accessing the code. Script Debugger’s unique Manifest tells you instantly what applications, scripting additions, libraries and frameworks are needed in order to run your script successfully

Tame long scripts and stay focused on your work

This is our #1 most requested feature! You can now collapse and hide blocks of code and focus on code that matters. This feature makes working on long scripts so much simpler. Even on short scripts, you can hide irrelevant parts of your code to reveal what’s important.

AppleScriptObjC is a powerful technology that makes Apple’s developer frameworks available to AppleScript. The problem is that its syntax is both verbose and unforgiving. Script Debugger 6 dramatically improves the AppleScriptObjC coding experience in several ways, starting with code completion tools that generate syntactically correct code.

No more typing current application's NSArray's arrayWithObjects: and hoping you got it right. In Script Debugger 6, class names, methods and enums are all just a click of the escape key away. All the heavy lifting is done for you, down to automatic contextual escaping of terms that clash with AppleScript terminology. Script Debugger 6 even inserts placeholders where you need to enter your own values, so you can simply tab from one to the next. It’s a revelation. 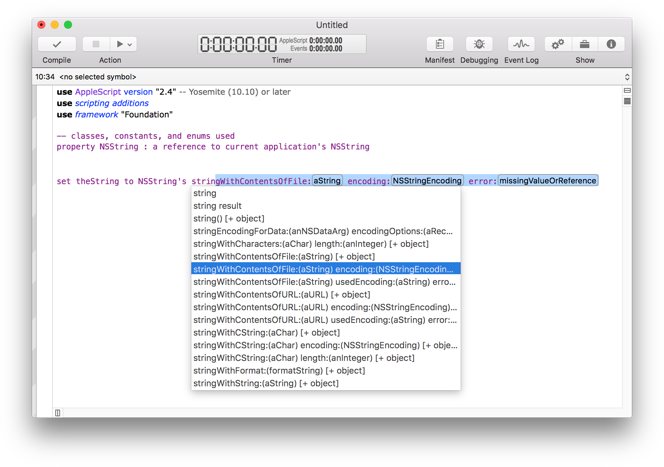 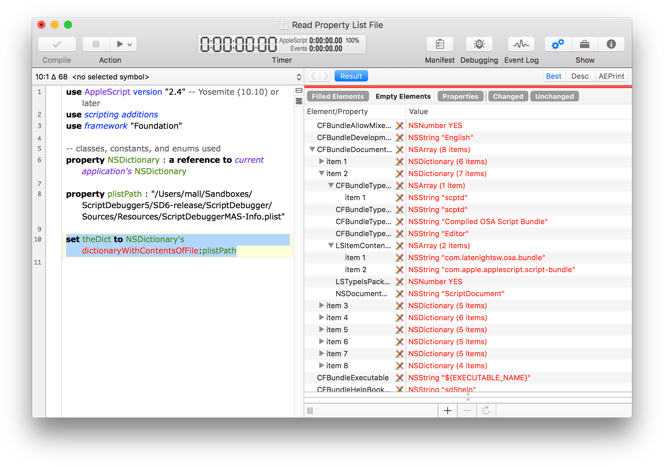 If you distribute scripts, chances are you want them to pass muster with Mac OS X’s Gatekeeper, and that means code signing them. Script Debugger 6 makes this task almost invisible with its always-on code signing. Turn it on, and your script is code signed every time it is saved. No more exporting, no more forgetting. 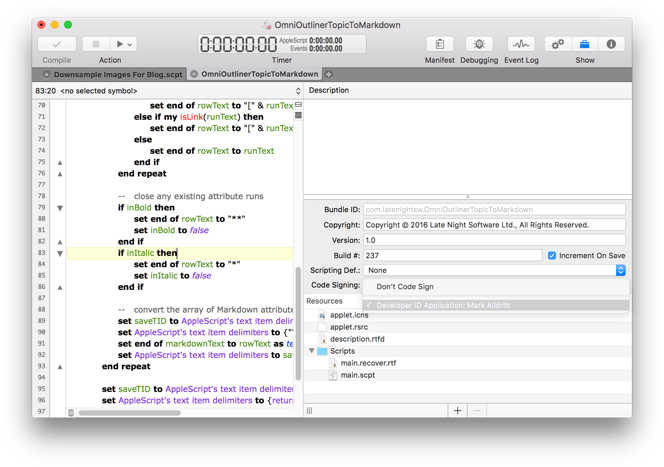 The power of AppleScript comes from its ability to harness other tools: applications, script libraries and frameworks. Script Debugger 6 introduces popup menus for entering application, library and framework names. You can see at a glance what script libraries are installed where, for example, and you will never need to type — or mis-type — one of their names again. In the case of use statements, it will even enter version numbers where applicable.

Clippings are now more powerful than ever

New features let clippings — snippets of code you can quickly insert into your code — include the ability to display application/library/framework pickers, and link multiple placeholders so their values change in unison. And they are now fully searchable. 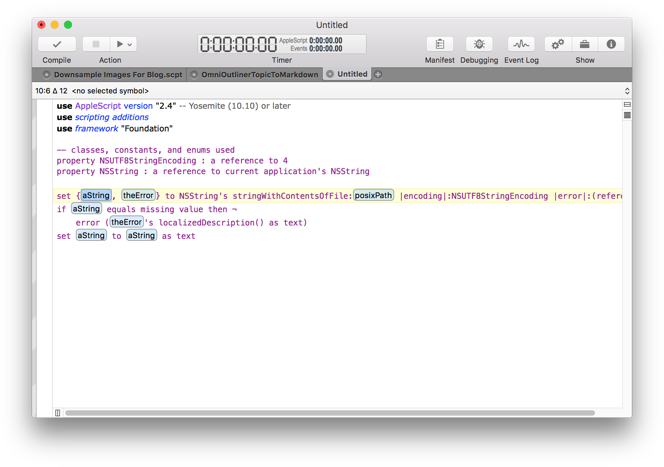 AppleScript’s progress properties are a great way of displaying a script’s progress in an applet, and now you can display them as you run your scripts in Script Debugger 6. 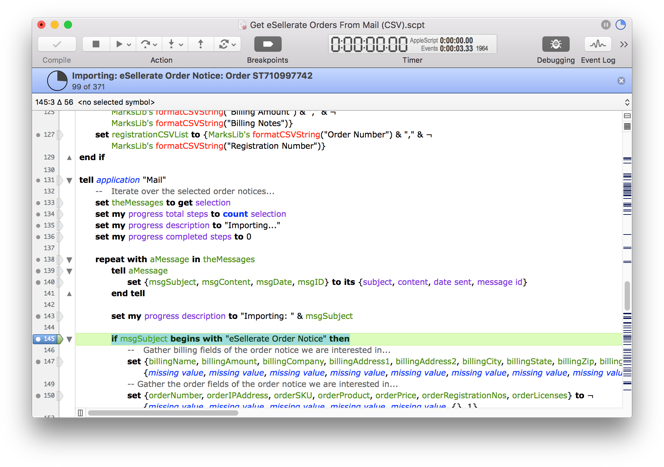 Script Debugger pays for itself many times over. Whether you’re a hobbyist, or scripting is part of your job, your time is valuable. Don’t waste it. Script Debugger saves you time on a range of fronts: better and faster editing, comprehensive debugging tools that go way beyond simple logging, and a dictionary Explorer that cuts through the tedium of scripting dictionaries to get straight to the point.

The price of Script Debugger 6 has been reduced by 50% making it affordable to anyone interested in make the most out of AppleScript.

When you have Script Debugger, you won’t shy away from automation opportunities. You’ll automate more and reap the benefits. Your projects will let you work more quickly and with greater consistency. Without Script Debugger you may still be doing things manually because creating an automation would not have seemed worthwhile.